I like to assess my horses’ progress every few months, as described in Posts 10, 28, and 29. But there’s another form of assessment that’s even more fun!

Invite a horse-savvy friend to come see you and your buddy every six months or so. That’s long enough for the friend to see a difference that you probably wouldn’t notice. Don't ask any questions; just wait to see what they notice. A friend of mine who hadn’t seen True in a year visited us recently.

“He’s so much bigger!” – Those were the first words out of her mouth. I hadn’t noticed that. I see True every day, and the tiny gradual changes in his size are easy to miss. Plus, you know me—always focused on the mind more than the body! But after she pointed it out, I had to agree.

True has grown another inch in height, to about 17 hands barefoot, and he has grown several inches in width. He’s six years old now. The average horse grows until age 5 to 7, depending partly on breed. Dutch warmbloods, like True, tend to mature late, so his skeleton will grow and solidify at least to the age of 7. He’ll continue to put on muscle beyond that age, given the proper exercise. Which I will be certain he gets!

“His conformation is textbook!” - I search for horses with excellent conformation because it aids long-term soundness. But like most babies, True’s body grew in all sorts of odd directions. For a long time, he had a youngster’s hay belly. Next to that hay belly, his legs seemed spindly. At times, his croup was higher than his withers… or vice versa. Sometimes his head looked too large for his body. At other times, his neck was too short for his shoulder. After a while, you stop looking and just teach the cute little knucklehead. But now True has grown into his body and a friend has opened my eyes. Yep, all the parts fit together into a cohesive whole.

“He floats when he trots!” – Thank you, we work hard on that. With long sloping pasterns, True’s always been smooth, but now he carries his 1400 pounds like a feather. When he was three, True trotted under saddle with too much hock action. It was as if he thought he was competing to be a five-gaited Saddlebred. With lots of careful flatwork, his trot has gone more into the horizontal than the vertical, so that his hind legs travel forward and back instead of up and down. His back is round most of the time now, too, giving him the ability to step under his belly for impulsion and power. Riding most of the time without benefit of video, I can feel this improvement but can’t see it. When a friend notices without being asked, I know we’ve made progress.

Now, it could be that my friends only want to flatter my ego and show their appreciation for my horse. But I doubt it. They aren’t the sort for idle flattery. After all, they’re perfectly willing to point out that True still grabs a rein in his mouth every now and then. Or spins, bolts, and bucks like a rodeo bronc when he’s scared. So I think they’re being honest in mentioning the good, the bad, and yes even the ugly.

Try it sometime. Invite a friend out and bask in the warmth of someone who can see the progress you’ve been working toward for so long. It’s satisfying. Even True seemed to arch his long neck a little more from the praise! 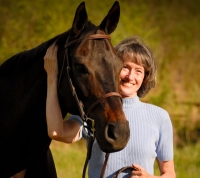 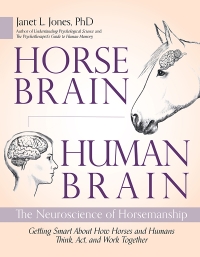